The Reign of Popes

“Even then, Saul’s writings, his predictions, those few that have been leaked in books and more recently on the Internet, these were just like those scribbles of Nostradamus -- these same vague verses have said different things to different men over the centuries.
“Every generation thought it knew, with complete and utter certainty, the identity of the Antichrist -- from Nero to Napoleon, Hitler to Ayatollah Khomeini, George Bush to Saddam Hussein to Osama bin Laden and … who’s next? They were all wrong. The world did not come to an end then and I do not believe that it will now.
“Everyone and his brother have throughout history, speculated who this Antichrist might be. Did not Saint Malachy predict almost a thousand years ago that I was to be the last Pope, the Antichrist?”
In 1139 while on a pilgrimage to the Vatican, this Irish saint reportedly described in a vision, all the 112 future Popes who would ever reign. The last he said would be Petrus Romanus -- Peter the Roman. He predicted the final Pontiff would ‘feed his flock amid many tribulations; after which the seven-hilled city will be destroyed and the dreadful Judge will judge the people. The End.’
Since May when he was elected as Pope, the media was awash with speculation about Saint Malachy’s predictions especially after Pope Peter II revealed his chosen name under which he would govern the Catholic Church. Some even went on to speculate that this final Pope would be the Antichrist, heralding the end of the world.
“So do you believe that Lil’ Poverello?”
“No, of course not. You are the chosen one, the Holy Father, the Vicar of Christ,” replied Father Jacque.
“But why do you choose to believe other predictions and yet not this one, made by a saint no less? Is his meaning not clear enough for you?” 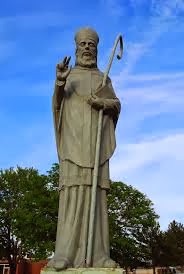 While many people still hold them to be true, a number of biblical scholars have largely dismissed the predictions allegedly made by Saint Malachy (1094–1148) who was the Archbishop of Armagh in Ireland during the 12th century.

His naming of the 112 future popes who would reign before the end of the world was published only in 1595 by a Benedictine historian (some describe him as a monk or Catholic priest) Arnold de Wyon, who recorded them in his book, Lignum Vitæ.

The story of Saint Malachy goes like this: In 1139 he was summoned to Rome by the then-Pope Innocent II to receive two wool palliums for the metropolitan sees of Armagh and Cashel. During the visit, he purportedly fell into a religious trance during which he described in very cryptic phrases all the popes to be elected until the end of the world.

His predictions were recorded but were kept hidden and largely forgotten in the Vatican Secret Archives until they were rediscovered in 1590 just before a papal conclave and at a time of great upheaval within the Catholic Church. The prophecies may have been created in an attempt to suggest that a bid by one Cardinal for the papal throne in the on-going 1590 conclave was somehow divinely ordained. Saint Malachy's alleged papal predictions were published some five years later.

Still some researchers of Malachy’s prophecies believe Pope Benedict XVI who resigned in February 2013 fits the description of the pope who would precede the final pontiff. The current Pope Francis is the 266th pontiff of the Catholic Church and is the 112th pope to hold office since the alleged predictions of Saint Malachy were made.